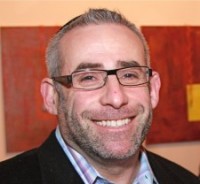 As Mayor Kasim Reed continues to brag that the city quashed Occupy Atlanta “without incident” – you know, other than those 52 arrests – and the city’s top cop pats his officers on the back for not replaying the Eagle raid, not everyone agrees that Tuesday’s late-night smackdown went so well.

On Monday, Reed (second photo) surrounded himself with religious leaders during a contentious City Hall press conference. The clergy, including gay Rabbi Joshua Lesser, were enlisted to help broker a compromise with Occupy Atlanta and avoid a police showdown. Reed says the protesters rebuffed the effort, so he ordered the cops to clear them from Woodruff Park. Occupy Atlanta says the mayor ignored his own group of clergy.

Lesser (top photo) told WSB that he was surprised at how quickly the city swept through the park.

“I was hopeful that there was going to be a little more time for clergy to speak with folks,” Lesser said.

Lesser later told Project Q Atlanta that prior to the press conference that he had visited Occupy Atlanta in the park three times. He hoped that joining the religious leaders would allow him to reach out to the LGBT people taking part in the protest.

“I had the potential to make a real connection. I was one of the few clergy people that had actually been down there three different days. I had a natural group of people to connect with,” Lesser said.

Since Reed ordered the clearing of the park, he’s faced critics who said he didn’t act soon enough, that he acted too fast, or did so with too much force. Some people are just never happy.

How about the cops? Chief George Turner says 150 took part, a number 50 percent higher than the one Reed offered on Wednesday. And they continued trailing Occupy Atlanta on Wednesday, using a helicopter to shine lights on their gathering of 200 people in Centennial Olympic Park.

Occupy Atlanta says it’s heading to Woodruff Park on Thursday to reorganize. That ought to be interesting. Atlanta police announced Wednesday that the park is closed and anyone – including media – who step foot inside would be arrested.

Where has all of the Radical Faerie love gone?