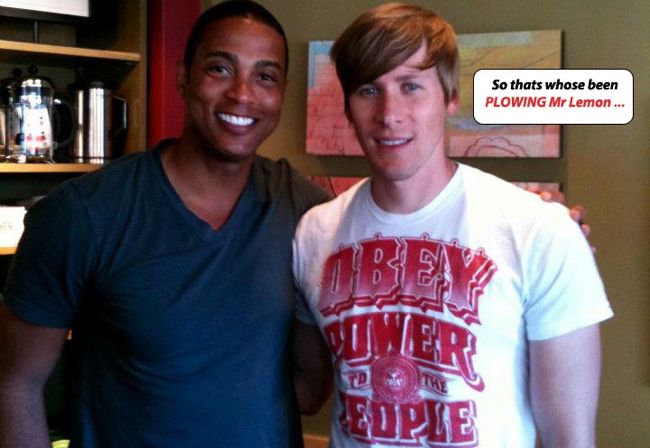 Who’s plowing Don Lemon, the attractive Atlanta-based CNN anchor that’s been making his own headlines since coming out earlier this year? One urban gossip site says it’s someone other than his longtime boyfriend.

With a splashy and wordy headline — “You Know That CUTE CNN Anchor … DON LEMON … Well We Got Pics Of Him and His BOYFRIEND … On A GAY DATE!!!” – Media Take Out earlier this month published two photos of Lemon with another man. That guy turned out to be Oscar-winning screenwriter and director Dustin Lance Black.

The website added this caption to one photo (top photo): “So that’s whose been PLOWING Mr Lemon …” And this one to another: “Good for Don … ever since he came OUT THE CLOSET this summer .. he’s been openly dating dudes…” 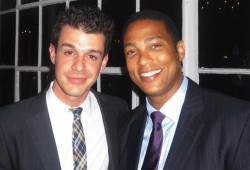 Facts aside, the photos make for a fun attention grab. And with Media Take Out’s less than gay-friendly audience, pics of Lemon, who is black, and Black, who is white, got the commenters enflamed. A taste: “I can’t believe that two handsome guys like that turn their backs on women, so sad.”

Not that we’re peeking inside Lemon’s home in Virginia-Highland to see who’s plowing who, but Lemon’s been dating CNN producer Ben Tinker for more than four years. They appear together in public, even as Lemon chats with muscled gladiators, Lemon referenced him during his Outwrite appearance in June, and they were arm-in-arm during a September event in New York (second photo).

Lemon has even talked about his marriage dilemma with Tinker and mentioned that he’s ready to be a daddy – as in father — as long as the kid comes with a nanny.

Before we dismiss Media Take Out for their offensive characterization – two gay men together, so they must be sexing it up – there’s also this. As Lemon answered his front door when a Creative Loafing reporter came knocking recently, he did so in pajama pants and a t-shirt before shuffling off to the bathroom and leaving the visitor with Tinker. Black was no where to be found.

“Ben is still here,” he hollers as he walks down the hallway to his bathroom. “You can talk to him.” Lemon is referring to Ben Tinker, a CNN producer he’s been dating for a few years. Though his friends and co-workers were already well aware that Lemon is gay, he only came out publicly earlier this year, around the same time he published a memoir, Transparent.

While Lemon gets dressed, Tinker hangs around in the living room for a few minutes, chatting about his recent move to Atlanta from New York. Art of all sorts — paintings, photographs, collages — adorns the walls. A beautiful Thornton Dial monograph sits prominently on the coffee table. Tinker is friendly, sweet even, but not very interested in being interviewed. In an industry like television, where one is either in front of the camera or behind it, Tinker clearly prefers the latter. Lemon, arriving back in the living room, is obviously the former.

For his part, Lemon won’t comment on the alleged fling with Black. Queerty tried to get Lemon to dish during a Twitter chat on Sunday. Lemon wouldn’t bite.

Ha! No comment. Nice try though. ‘A’ for effort.

Lemon won’t dive into the gossip that’s been surrounding him since coming out. But he could take the Johnny Weir approach – a couple of lovey-dovey tweets to his man to set the record straight, so to speak.