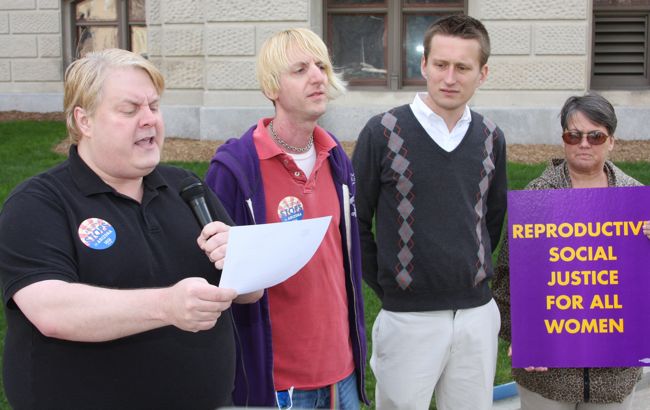 Plans for a face-to-face confrontation with an outspoken anti-gay lawmaker fizzled at the State Capitol on Tuesday as state Rep. Bobby Franklin didn’t emerge from the House chamber to meet with LGBT activists.

The action, orchestrated by the Queer Justice League and GetEQUAL Georgia, was another attempt to elicit an apology from Franklin (second photo) for his comments last month comparing LGBT people to drug dealers. But like the initial call from the gay groups to apologize, Franklin rebuffed them again this time, too, by refusing a request to emerge from the House floor and talk with the handful of activists.

The lawmaker’s response to that? He told critics that “their problem is with God and not with me.”

“I want to remind Rep. Franklin that he represents all of his constituents in Cobb County,” Art Izzard, a Queer Justice League member, said outside the State Capitol. “When he denigrates any one of us, he is denigrating everyone, and he needs to step forward and apologize for the comments he made.”

The activists met at the Gold Dome Tuesday morning, walked inside to the House chamber and requested through a page that Franklin meet with them in the hallway. It’s a common practice employed by constituents and lobbyists at the State Capitol when the General Assembly is in session. The activists waited about 15 minutes for Franklin to emerge; when he didn’t, they instead delivered the letter to his office.