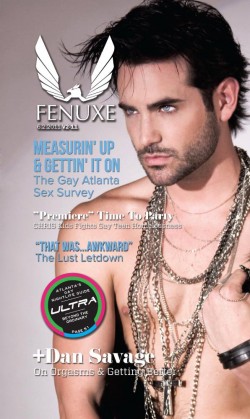 Bigger, better and versatile. The Gay Atlanta Sex Survey results are in and we have one thing to say: You gay boys are a whorish, kinky bunch who’d rather cheat on your man than take a few minutes to pleasure your own self.

For its sex issue, Fenuxe surveyed its readers on all things sexual, from the size of the piece they’re packing to when they lost their virginity, to their strangest public encounter. The results didn’t surprise us much – well, two did and we’ll get to that in a minute – but they do confirm that given the anonymity of a survey, we’ll open up and dish about our sexual secrets.

Let’s get to the meat of the mag’s first sex survey:

• Endowment. With the average penis just a flap of skin over five inches, respondents to the survey show they are packing some pride – seven inches, to be exact. Now that’s plenty to be thankful for.

• Size Queens: A majority of people say size matters. Of course it does.

• Flip-flop. Gay Atlanta has long had a reputation as being a bottoms up sort of place. Guess that’s one way to take advantage of our gays packing more than the national average. Survey says: 61 percent report being versatile. All of those extra inches floating around town are tempting even the toughest tops.

• Kinky bitch: 10 percent of respondents say they’ve had sex in a church and when asked what’s your kink, answers include armpits, domination and underwear.

• This ass for cash: 28 percent say they’ve gotten some bling for their sexual relations. Three percent seemed confused by the question. OK, so that means 31 percent of respondents say their booty call comes with a price tag.

If you can’t figure out from the survey above that you’re a manwhore, Fenuxe also offers a five-question Sexual Personality Profile to confirm it. Consider this: Things are really hot and heavy now. Do you dirty talk? Ponder your response, pick up the June 2 issue and check it out for yourself. (You can also scroll through the mag online — sex survey on pages 36-37 with Sexual Personality Profile on page 46.)