7 gay truths with ‘The Beekman Boys’ in Atlanta 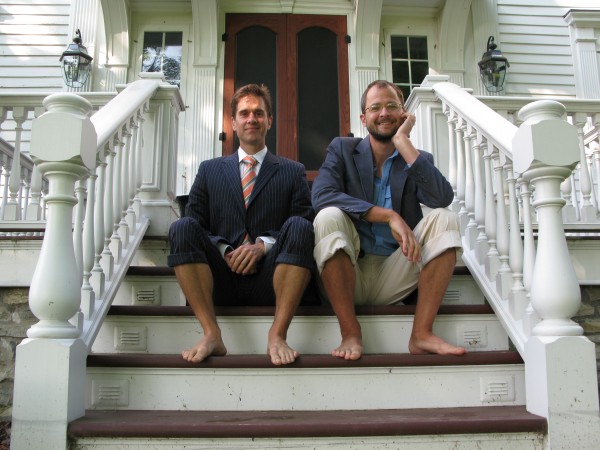 Before you mosey on down to see TV’s favorite gay country gentlemen in Atlanta this weekend, we chatted with “The Fabulous Beekman Boys” Josh Kilmer-Purcell and Brent Ridge for a crash course in food, gay marriage and what Atlanta does best.

Our open love affair with the real-life “Green Acres” story of city life to farm livin’ of the couple (photo) continues. We’ve been smitten for over a decade, but the real surge of public whirlwind since 2011 ups Kilmer-Purcell’s (right) career as an esteemed gay author to skyrocket the pair’s fame on “Beekman Boys” reality show, cooking show, goat farm business, cookbooks and to top it all winning “The Amazing Race.”

What can we expect during your Atlanta appearances on Saturday?

The cooking class at Cook's Warehouse is the 35th stop of our 39-event tour for “Beekman 1802 Heirloom Desserts.” So we are either going to be well-seasoned or a complete mess. Let it be a surprise!

Since you talk about cooking so much in your work, what keeps you passionate?

Simple. What keeps us passionate about food is the fact that we like to eat!

What advice would you give to kitchen novices?

The most important thing that any home cook can do is to try new things. Each time you go to the market, tell yourself that you are going to try at least one new ingredient – a vegetable or fruit you haven't tried or a new type of cheese or spice.

We’ve egged on a tongue-in-cheek debate of “city gays” vs. “country gays”? As you experience both, which is “better”?

Regardless of where you live and whether you are gay or straight, the most important thing to foster is a since of community. We've all grown far too accustomed to sitting behind our computers or staring down at our mobile devices. Making eye contact, saying “hi” to a neighbor, being involved in a physical and geographical community is important to creating relationships.

You got married! Congratulations. Has it changed your relationship or your perspective?

After 15 years together, little has changed since the actual wedding date, but the most important thing about the event is that so many people across America – particularly in the middle of the country – got to witness a real life gay couple get married. So much of the homophobia that we see – and that is perpetuated by the media – is really the result of lack of exposure and explanation.

How do you balance private with public life? What's the weirdest thing about being famous?

Whether it is on “The Fabulous Beekman Boys” or on “The Amazing Race,” we always made it a point to be exactly ourselves. No part of our “image” was created or shaped to fit someone else's expectations, so we don't really worry about being seen in public. We are who we are. The strangest thing to us is when people Tweet or post on Facebook that they saw us somewhere but then didn't say “hi.” We've never once bitten anyone (in public).

Anything you've grown to expect from gay Atlanta when you get here?

Brent is from the South, and Josh landed a “good Southern boy,” so both of us are well-versed in both the gentilities and eccentricities of the South. The people of Atlanta do both better than anyone else.

“Beekman Boys'” appearances are just two of the Best gay things to do in Atlanta this weekend.