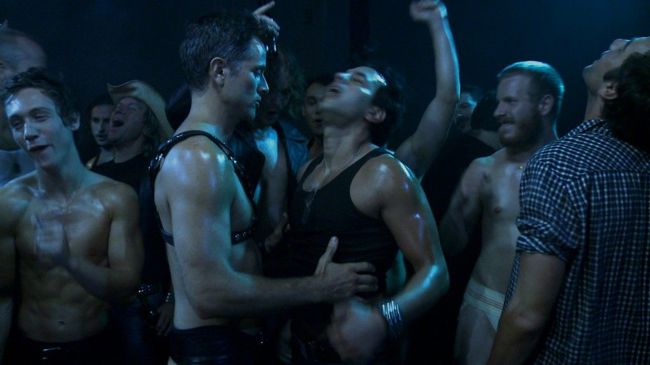 Leather, politics and pit stops. The Atlanta Film Festival offers a handful of reasons for gay movie-goers to check in on the Pink Peach, the massive festival's slate of LGBT programming. Sprinkled into the Atlanta Film Festival's schedule, which runs March 15-24 at the Plaza Theatre and 7 Stages, are a half-dozen LGBT films, plus several shorts. The gay films run March 17-22. Here’s a look at the Pink Peach features:

"God Loves Uganda" is a documentary by Roger Ross Williams looking at unrest in the African country. The Kansas City-based International House of Prayer, an evangelical group, visits Uganda and loudly advocates abstinence – in an area that has been hit hard by AIDS – and protest homosexuality. Many listen but others, such as Bishop Christopher Senyonjo, defend LGBT people. The film is certainly timely and unsettling, as current legislation in Uganda would make homosexuality illegal and punishable by death.

In Stacie Passon’s “Concussion," a glorious Robin Weigert stars as Abby, who is a bored, restless Manhattan woman with a female partner and kids. After being hit in the head in an accident she visits a female sex worker and then decides to get into the business herself, juggling tricks while she is supposed to be re-doing a fixer-upper with a contractor friend.

Atlanta filmmaker Cindy Abel’s “Breaking Through” is a documentary interviewing LGBT politicians about the intersection of their personal and professional lives. Among those interviewed are local elected officials Alex Wan, Karla Drenner, Joan Garner, Kecia Cunningham and Brian Bates. Senators Barney Frank and Tammy Baldwin are also featured. Abel has held fundraisers in Atlanta to support the project.

Yen Tan’s “Pit Stop” is a drama about the intersecting lives of two men in a small town, both on the rebound from bad relationships. Far away from the gay bars and life of a big city, Gabe and Ernesto manage to never cross paths until they -- satisfyingly -- find each other.

“Interior. Leather Bar" (top photo) is the much-hyped examination of the 40 minutes missing from the Al Pacino gay-themed thriller “Cruising,” footage that supposedly would have given the film an X rating. As directed by Travis Mathews and James Franco, the film is likely to be viewed differently by straight and gay audiences. Straights might be intrigued by Franco -- now a Disney star -- and his willingness to talk about gay issues and rights. Gays, though, will probably yawn at this endlessly talky mockumentary with few revelation from Franco and not much action overall, save for heterosexual men contemplating what playing gay will do to their career.

Perhaps the best of the LGBT fare is the lesbian themed “Mosquita ya Mari." It's the story of two girls who begin a friendship and relationship. Yolanda (Fenessa Pineda) is a straight-A student -- used to doing the right thing at school and at home -- whose life changes when Mari (Venecia Troncoso) moves in across the street in their Los Angeles home. This award-winning feature by Aurora Guerrero is sweet and original and has affecting performances by its two leads. A number of shorts also make up part of the Pink Peach, including “Daniel,” about a boy’s sexual awakening; “Sabbatical,” about a male couple who meet up again after taking time away from each other; and “Little Man,” a psychological thriller about a 30ish man unable to make relationships last -- and a mystery he uncovers in the apartment upstairs.