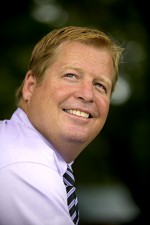 Straight white men in Atlanta’s District 6 rejoice. You now have your champion in candidate Tad Christian.

On Wednesday, the stay-at-home dad and neighborhood activist threw his hat into the crowded ring that is the race for the open seat on the Atlanta City Council, joining five other candidates to represent Midtown, Virginia-Highland, Morningside and portions of Druid Hills. In the diversity that reflects the district, candidates include three gay men, one straight man and two straight women.

In other words, it’s a crowded field.

Christian brings a mix of business experience and civic involvement, including recently wrapping up a one-year term as president of the Morningside Lenox Park Civic Association. He also serves on the city’s Zoning Adjustments board. Christian, his wife and two daughters live in Morningside.

“I am always working to resolve problems that plague our city neighborhoods, and this volunteer action led to me being elected as president of our neighborhood association,” Christian says in a prepared statement. “I really want to take the knowledge and experience I have gained thorough volunteer service and participation on various zoning boards, to the City Council, where I can have a greater impact on improving a full range of issues facing our city.”

He also includes this nugget in the release announcing his campaign:

After more than 12 years with experience in Project/Production Management, Procurement Quality Assurance, Business Development and Industrial Engineering, Christian became a stay-at-home dad. He has spent the past eight years raising two daughters, while being very active in the Atlanta community. As President of The Morningside Lenox Park Civic Association, he successfully grew membership by lowering the annual dues, had a successful 2008 Tour of Homes and held an inaugural Monumental Ball fundraiser for the neighborhood association.

Left without an incumbent — Anne Fauver opted not to seek a third term — the race is becoming one of the most competitive in the city. The 15-person council could include at least four new members when it convenes in January with the demographic shifts in the city making this cycle difficult to predict, according to an analysis from Creative Loafing.

The pool of candidates also means District 6 could have a non-gay representative for the first time in more than a decade. But the candidates face a financial disadvantage, as Wan raised twice as much cash — and has twice as much on hand — as all of the other candidates combined in the most recent reporting period.