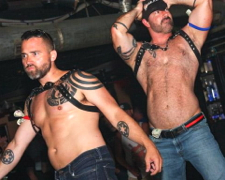 Love it or leave, gayest city or not, five Atlanta nightspots landed on a very unscientific takedown of the 200 Best Gay Bars in the World. Have you gotten drunk in all of them?

Let's just skip the notable exceptions to the list from Out magazine. We're used to the selective gay this or that list from national glossies. Instead, we'll celebrate with Atlanta having so many tops in a city known for its hungry, kinky bottoms.

So consider these Atlanta inclusions on the list culled from nominations, suggestions, polls and other forms of research that may or may not have passed muster with your college professors.

BLAKE'S ON THE PARK: This spot has been a neighborhood institution for decades and remains the hub of Atlanta gayest area, Midtown. Whether it's drag shows or boys in baseball caps, there's usually something for everyone at this watering hole.

CHURCH: Officially known as Sister Louisa's Church of the Living Room and Ping Pong Emporium, Grant Henry's unusual joint has transformed a corner of Edgewood (an underutilized neighborhood near downtown Atlanta) into a hip destination only a few blocks from the Martin Luther King Historic District. Although a straight-friendly hangout, the gay boys pack the place nightly.

HERETIC (photo): After many of the others have come and gone, this remains one of the liveliest (and most scandalous) dance floors in the city—which makes it one of the easiest places to meet someone without having to use an app.

MARY'S : Located in hipsterish East Atlanta Village, Mary’s is well known for its karaoke nights and for attracting the cooler crowds. With strong drinks and a mini dance floor, the flirty bar’s theme nights range from outrageous to downright unsavory: Hanky Code Party, XXXMess, Get Stuffed, and the new drag night, Gurlfrandz.

TEN ATLANTA: A new addition to the scene, Ten Atlanta replaced a beloved hamburger joint downtown, spiffed up the joint with a chic makeover, and now serves up hot beef in food form by day and in go-go boy form by night.

And hey, with five bars on the Out list, Atlanta scored more places than most cities across the globe. So that's saying something. And we've got gay sugar daddies, too.

Now, with list in hand, get your big gay weekend going.