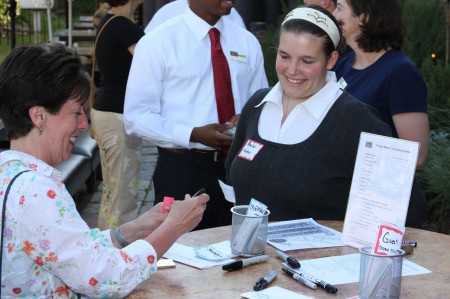 The crowd filled the outdoor space of No Mas Cantina in Castleberry Hill for margaritas, Mexican food and conversation during the event, which the chamber holds monthly.

Among the guests was Mary Squires, a former state senator who in 2004 was one of only 14 senators to vote against a proposed state constitutional amendment banning gay marriage that later became law. Squires, who lost a bid to win the Democratic nomination for U.S. Senate that same year, said she is seeking the Democratic nomination in 2010 for Georgia Insurance Commissioner. That spot, elected statewide, is being vacated by John Oxendine, a conservative Republican who is running for governor.

Next up for the chamber is its continuing series of Business Builder Luncheons May 12 and 19.

View the Project Q Atlanta photo album from the event. See more photos from the event at the Atlanta Gay & Lesbian Chamber of Commerce’s photo gallery.