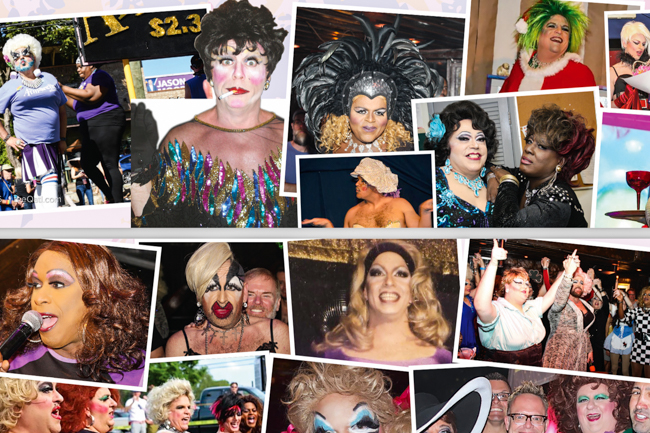 Queer Atlanta is a world away from 1979. Half of the people reading this weren’t even born when a group of burly, bearded gay men donned cheerleader drag to support a Hotlanta Softball team for fun and fundraising.

“The Amorettes have always had a special place in the LGBTQ community,” says Tony Kearney, who started going to shows in 1992 and joined the troop in 1999 as queen Wild Cherry Sucret.

“In the beginning, they were literally the cheerleaders for the cause in the Atlanta gay community,” he says. “40 years later, they have still kept it moving, giving out checks to numerous agencies that represent all facets of the community.”

And camp. Lots and lots of camp.

“The Armorettes were always campy, but the beginning girls really owned it from facial hair to balloon boobs, to the tragic outfits,” Kearney says. “The emcees in the show will take you through the history of the group, and some of the classic pairings will be working together once again.”

The troupe celebrates with a supersized 40th Anniversary Show on Jan. 19 at Buckhead Theatre. The weekend also includes a special edition of their weekly Sunday show at Midtown Moon. Some of the production is such a huge surprise for longtime fans that queens are keeping it hush-hush, but the reveal will be worth it, Kearney promises.

“The show will start with a bang and end with an even bigger one,” he says. “The production value of the performances will be elevated to match the occasion and the venue with big props and some yummy male dancers. Get those iPhones out.”

It’s the stuff legends are made of. Speaking of which, some of the most popular names from casts past are confirmed for the lineup. Jayne Russell, Anita Mann, Knomie Moore, Deva Station, Bubba D. Licious, Alexandria Martin, Coretta Scott Queen, and of course your favorite Sucret.

“We will have a couple original Armorettes there in the senior citizen section of course,” Kearney laughs. “The best part is that some of the queens have not performed since departing the group.”

When HIV hit in the early ‘80s, the Armorettes took on an even deeper role in queer Atlanta. The group made AIDS its sole mission with weekly shows and other special events.

That’s when they also coined a motto that provides the theme for the Armorettes: Laughter & Tears.

“People have always come to our shows for different reasons,” Kearney says. “Some people are there to laugh, to remember loved ones, to escape, and some to cry. The Amorettes have provided emotion outlets to people over this crisis.”

“I remember a show where a patron came up to me and hugged me and said this was the literally the first time he had laughed since finding out his status,” Kearney remembers.

Through all of it, the group has raised more than $2 million against AIDS, and it’s a legacy that the members believe can live beyond the disease because of the heart at the core of the group.

“The Amorettes were leaders in the queer community in the beginning when no one was really paying attention to the crisis,” Kearney says. “People were angry and sad and needed to do something. I think when the day comes that there is a cure, the Amorettes will pick up the mantle for another needy cause like LGBTQ homeless youth, people without insurance, queer housing, domestic abuse. They will find their niche where they can help.”

Because they care. It goes deep, and it goes on and on, Kearney believes.

“Think about this. A group of gay men in wigs and dresses in 40 years have raised over $2.3 million one dollar at a time,” he says. “Atlanta has been blessed to have this group in the community. It has been a privilege for us to entertain you. Now for one huge night, we are all together again in one place, and we will truly see the magnitude and the difference we made in people’s lives across decades.”

This article originally ran in Q magazine. Flip through the latest edition below.

Pick up a new issue of Q magazine each week at queer and LGBTQ-friendly venues around town.