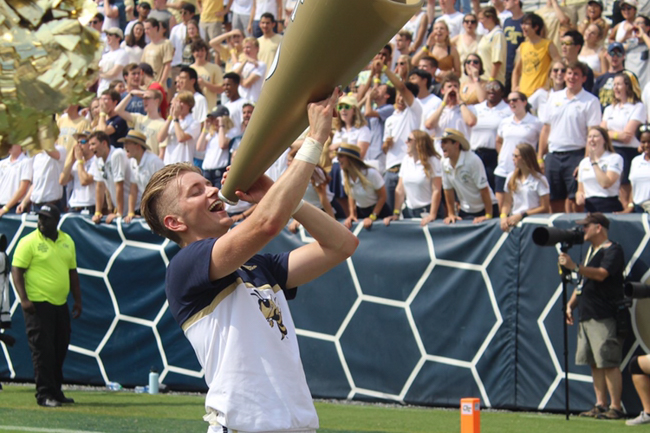 They're here. They’re queer. They cheer. The Georgia Tech cheerleading squad includes at least three LGBTQ members and is led by out head coach Daniel Nester, and they largely enjoy widespread acceptance as out members of the squad.

But Nester, who cheered at Virginia Tech before going into coaching in 2011, didn’t always feel this level of support to do what he loves. He took up cheerleading as a teenager but didn’t feel comfortable being part of his high school squad in rural Virginia.

“It’s not the place for a male cheerleader without a lot of ridicule coming with it,” he told Q. “I traveled with a club program that was an hour-and-a-half away, because I knew it would be better for me if I was farther away than in my hometown doing it.”

Now Nester gets to lead a squad as cheerleading is in the midst of a moment. The Netflix docuseries Cheer premiered in January to rave reviews from critics and viewers.

“It’s everywhere right now. It has really helped us,” he said. “I think a lot of people see cheer and dance as a sideline activity and not a sport. It’s not just the pom-pom waving. I’ve had multiple people in other departments say, ‘Ohhh, so this is what you do?’”

The squad is busy preparing for the National Cheerleaders Association Collegiate National Championship in Daytona Beach, Fla., in April. Add in hours of practice, at least one home basketball game a week, and cheer camps for kids during the NCAA Final Four in Atlanta, and it’s a busy bunch of students. 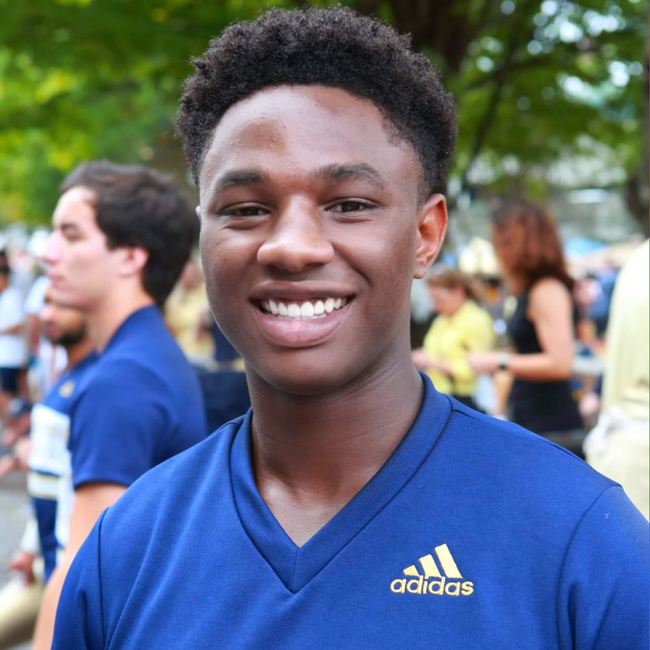 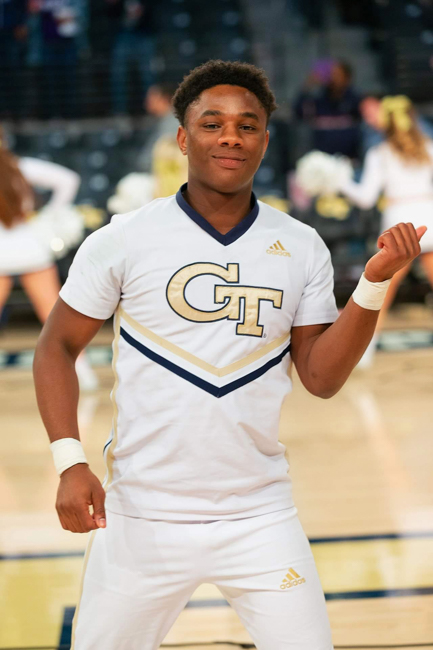 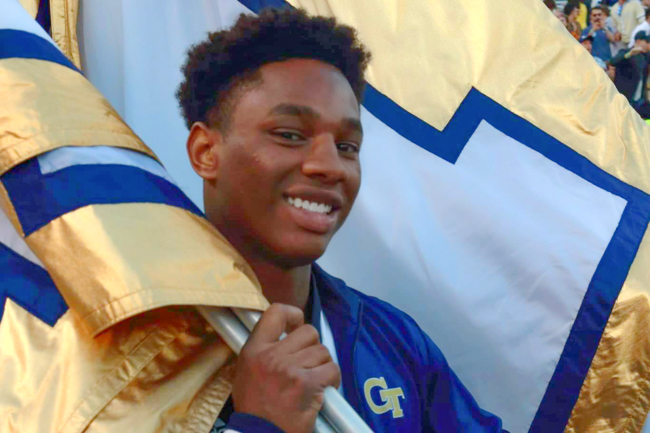 What's your most memorable moment as a Georgia Tech cheerleader?

Homecoming. The whole team got new uniforms, and everyone was excited to wear them for the game. The energy that morning was just different than all of other games, and it was amazing to be a part of it.

It was also one of the first games I did a good amount of stunting, so finally being able to showcase something I had been working on for a while was really fun.

When did you first start cheerleading, and did you get flak from people?

I first started cheering in August after school had started. I didn’t make the decision to try out until the week before I left for school. Everyone questioned why I wanted to become a cheerleader and thought it was a waste of time. They all thought it was a girl’s sport and wondered how I could go from being a baseball player all the way through high school to being a cheerleader. I don’t get as much flak anymore because people, especially the ones close to me, see how much work I put into the sport.

What's the biggest misconception about cheerleading?

That it’s not a physical sport. The first thing that pops into people’s head when they hear cheerleading is saying cheers on the sideline during a football game. Yeah we have cheers, but that’s not even close to all the things we do and practice. We have stunting, tumbling, baskets and so much more that go into being a cheerleader.

It really shows people what being a collegiate cheerleader is actually like. They get to see that it is physically and mentally taxing on your body. If you aren’t a cheerleader, you don’t really know how much we but our bodies through and it’s way more work than people first think.

A big part of collegiate cheer is Nationals in the spring that people from across the country prepare for, and if you aren’t a part of that world, you probably wouldn’t know about it. My friends would always ask me when cheer is over and I would tell them April. They would be shocked at my answer because they just think we cheer at football games, a few basketball games and that’s it, when really our main focus for most of the year is going to Nationals. Cheer isn’t something we just happen to do in our free time.  We put in a lot of work and time into what we do.

It means everything. A lot of times, practice can be rough and tiring, but around them I feel like I can let my guard down a little and be me. I don’t feel like I have to keep up a persona to make sure I’m being taken seriously.

Being a part of the LGBTQ community provides a bond between people you can’t find somewhere else. With them being my teammates, the bond is even stronger, and when practice gets tough, that bond is something I can really depend on. 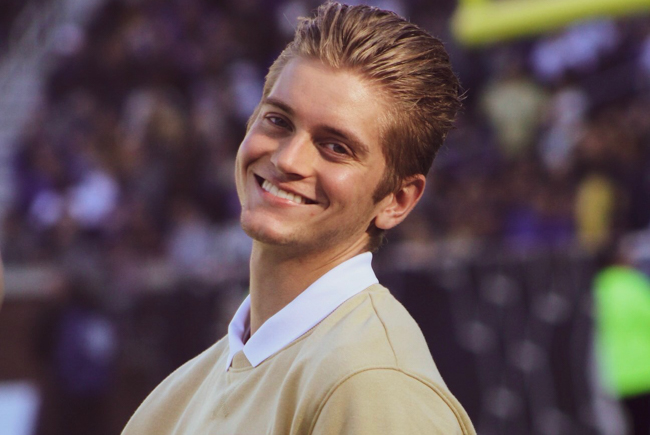 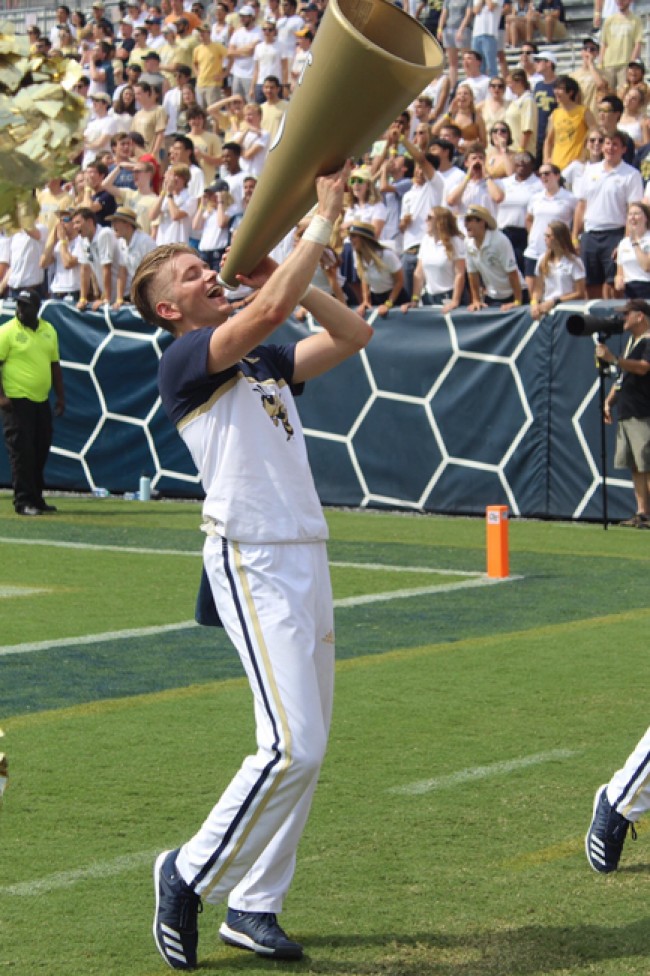 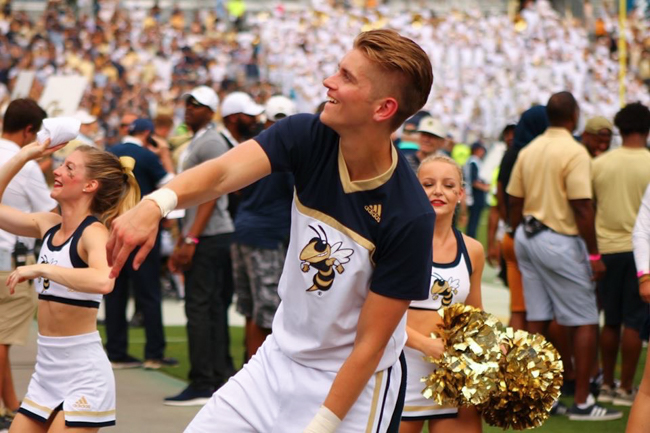 What's been your most memorable moment as a Georgia Tech cheerleader?

The first game day. It was awesome running out onto the field with all the fans in the stands and being able to cheer with some of my closest friends.

When did you first start cheerleading, and did you get flak for it?

I first started cheerleading my junior year of high school. I didn't get any pushback from people, because there had been a lot of male cheerleaders at my high school, so it's pretty much not a weird thing.

I definitely do not get any pushback currently because all of my friends really support me, and there are a lot of guys on the team, so there's not really an opportunity for any sort of negative energy because all the other sports respect us as well.

What's the biggest misconception about cheerleading?

That if you're a cheerleader you aren't very smart. But that is not the case, there are plenty of smart cheerleaders, and in terms of Georgia Tech, we all had to get into the school before making the team, so we are all intelligent as well.

I think the Netflix show has opened people’s eyes to the level of difficulty and time commitment it takes to perfect a routine. I think people assumed that competitive cheerleading and sideline cheerleading was just a bunch of people prancing around and looking pretty, but the documentary shows that a lot more effort and work goes into the level of eliteness that is being accomplished on the mat.

That means a lot to me, because it is an instant support group when I'm going through issues that other people might not understand completely. It's nice to know that I have a community within a community that I can relate to where we share the same passions, and that's cheerleading. 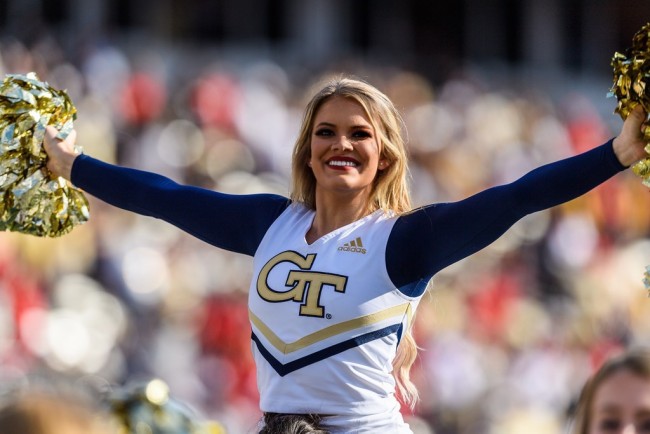 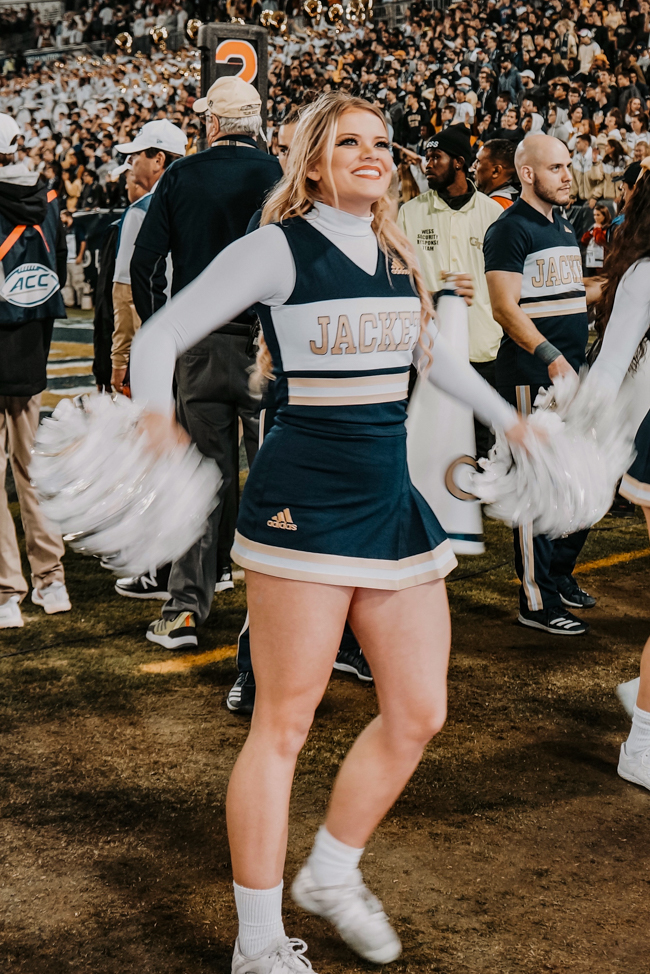 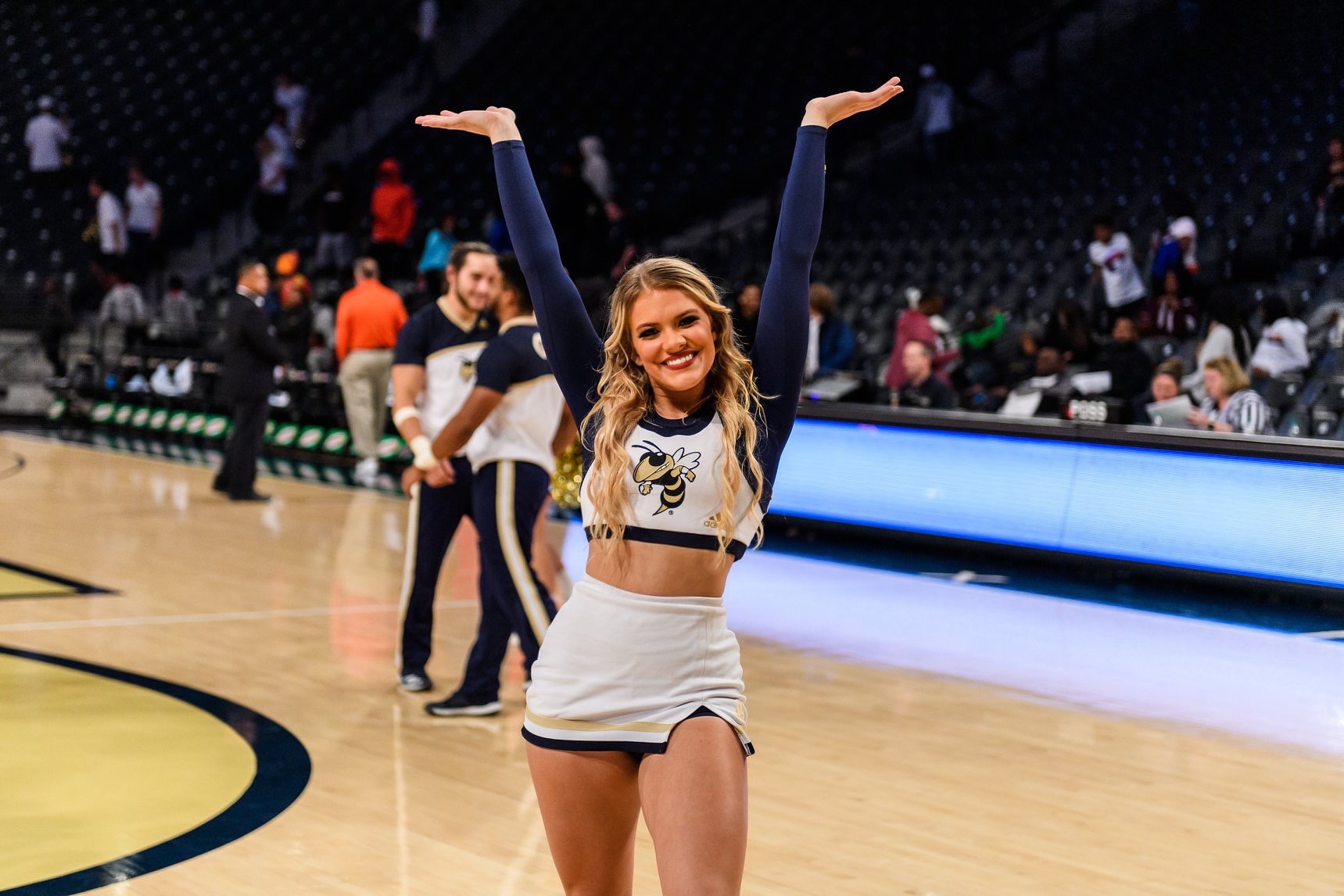 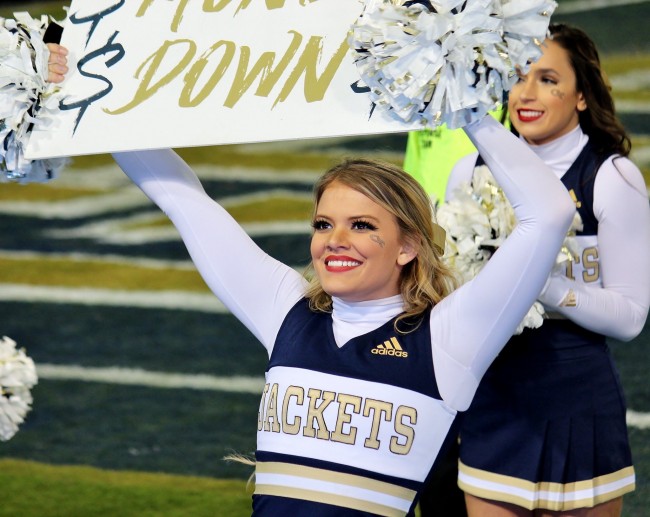 What's been your most memorable moment as a Georgia Tech cheerleader?

My first night game in Bobby Dodd. It was actually my second year, I was a flyer on the Gold squad. It was a close game against Virginia that we ended up winning by a last-minute overtime field goal. The stadium was electric, and it was absolutely the most exciting and exhilarating game I’ve ever cheered.

Nationals is also life-changing though, competing on the Bandshell [amphitheater in Daytona] for the first time was just as magical.

What's the biggest misconception about cheerleaders/cheerleading?

There are so many. Dumb blonde cheerleaders, all the guys are gay, all the girls are straight, cheerleading isn’t even a sport… Cheer’s misconception spotlight is usually on the superficial aspects of the sport.

In respect to sexuality, as a female-dominated sport, people assume everything about it falls into a feminine category. While cheer is one of the most welcoming sports for gay men, the stigmatization that all men who cheer are gay is obviously false. Additionally, being a lesbian cheerleader is a category which is always overlooked. I’m still known as “the lesbian cheerleader” at the high school I attended because the idea of a cheerleader being anything but straight, especially in bible belt Augusta, Ga., started controversy, and still does even in college.

The oversexualization of the sport is what’s holding back the sport the most in general. The sexy cheerleader aesthetic overshadows the actual sport itself.

I absolutely love it. I’ve told everyone if they want to try and understand the sport to watch it. It pretty accurately shows not only the athleticism and passion required for the sport, but also breaks down and explains the different parts of cheerleading pretty well. The structure of our competition season is also the same as them, the same NCA Nationals in Daytona is the only competition we go to as well. Our goals are the same ones the show highlights: making mat, hitting routines, winning Nationals.

I’m very open about my sexuality in hopes that, as a senior member of the team and in previous years the only openly LGBT cheerleader, I try to always be available if anyone needs help or guidance concerning issues with sexuality, mental health or anything.

Having strong, open people is important for younger teammates still figuring out life, because I struggled to find a mentor for a long time. I just try my hardest to be as helpful and available to anyone who needs it, because life is already hard enough.

A portion of these interviews originally ran in Q magazine. Read the latest issue online here: