Three months after it danced its last dance, popular gay country bar 3 Legged Cowboy is returning – first as special themed nights at the Heretic and later, possibly early next year, as a standalone bar in Midtown.

Beginning Aug. 4, the Heretic will host 3 Legged Cowboy Night on Thursdays and select Saturdays complete with the dance lessons and country music that fans of the country bar – first known as Hoedown’s and later 3 Legged Cowboy – came to expect.

“I think they will surprised when they see the Heretic,” says Deana Collins (top photo), one of the owners of 3 Legged Cowboy. “It will be a lot of fun. I am excited about it for the first time in a long, long time. How wonderful that they are inviting us to come in there and do our country.”

Collins says that fans of the now-closed country bar should expect to enjoy the same atmosphere at the Heretic, complete with former DJs and memorabilia. There’s no end date in sight for the country-themed nights at the Heretic, but it will take crowds to keep it happening, she says.

“Our people may come once, but that doesn’t mean they will come twice if it’s not done right the first time. First impressions are important. It is going to look country. They don’t have to worry about that. We are taking a lot of stuff from 3 Legged and putting it in there. It will be decorated the way it should be. If you are going to do it, you’ve got to do it right. You have to have your atmosphere,” Collins says.

“The kids need to come out and check it out for themselves, see what thy think and put in some input. Get off of your duff and come on out,” she adds. 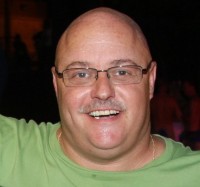 3 Legged Cowboy shut its doors on April 30 just six days after its owners announced on Facebook that it was closing. On the bar’s last night, Collins delivered an emotional farewell to a packed crowd.

Alan Collins (bottom photo), general manager at Heretic, says a longtime friendship with Collins and the 3 Legged Cowboy’s other owners led the club to offer to host the country-themed nights.

The county-themed nights will open with dance lessons at 8 p.m., then shift to dancing at 9 p.m. On Thursdays, it’s two-step lessons, with line dance instructions on Saturdays.

But Deana Collins says the shift to the Heretic is only temporary. She’s scouting at least two possible locations in Midtown to re-open 3 Legged Cowboy, a move that could take place in early 2012.

“We have a couple of spots in mind already and we are working on it,” she says.

Collins says a move wasn’t as simple as shifting the liquor license from the former bar to a new location. And the owners must have a location before they can start an application for a new license, she says.

“I decided the best thing to do would be to wait until the first of the year and go for my license again and have the full year. We will be ready to hit it hard and fast when it’s there,” Deana Collins says.

The closure of 3 Legged Cowboy in April wasn’t the first time the bar has closed. The Midtown space shut its door abruptly on Aug. 13, 2007 when it was named Hoedown’s and owned by gay businessperson Ben Elliott and his family, which had become the majority shareholder. The contents of the bar were sold at public auction about a year after Elliott purchased it. The space was later reopened as 3 Legged Cowboy with some of the management that owned Hoedowns prior to Elliott.

For fans of the Heretic, Alan Collins says it supporters shouldn’t worry. The bar isn’t straying from its mission as a gay male dance hotspot. The bar’s Dress Code parties remain in place on Wednesday, resident DJ Lydia Prim works the booth with her dance music on Fridays, and they’ll still be bringing national-known DJ talent to the club every month.