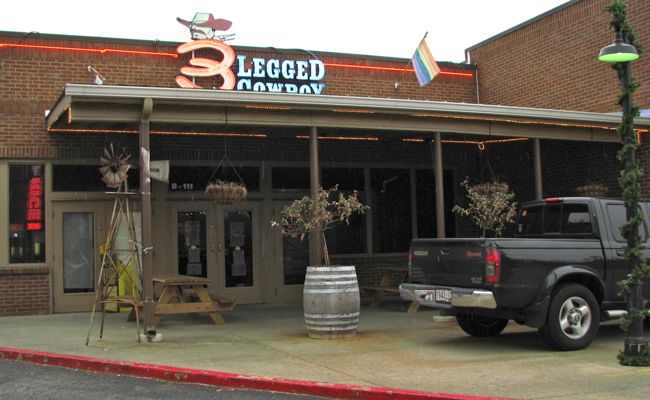 Gay Atlanta’s longtime country bar, 3 Legged Cowboy, says it will dance its final two-step on Saturday when it closes its doors for good.

The bar made the announcement on Sunday on its Facebook page. It also asked customers to post pictures and videos of their favorite memories at the Midtown venue.

“Rumors are true,” the bar says. “We have sad news. Saturday, April 30th will be our last night open. Make sure to come this week and dance. We love everyone of you and appreciate the support over the years. Spread the word.”

Supporters posted their reactions to the news, from expressing sadness over the closing to wondering where to go for their country fix once 3 Legged Cowboy closes on Saturday.

The bar responded – “So so so very sorry guys” – but did not offer details on why the doors are being shut. A post to the Facebook page later on Sunday indicated that the bar’s country western dancers will continue gathering for their monthly parties on the first Thursday at Frogs. The two businesses sit near one another in the Monroe Drive shopping center in which they share a parking lot. Drag personality Suzanne Sugarbaby posted a message to the Facebook page that she’s scouting new locations for her Trailer Park Revue, which took place at the bar.

Early Monday, no one answered the phone at the bar.

It’s not the first time the bar has closed. It shut its door abruptly on Aug. 13, 2007 when it was named Hoedown’s and owned by gay businessperson Ben Elliott and his family, which had become the majority shareholder. The contents of the bar were sold at public auction about a year after Elliott purchased it. The space was later reopened as 3 Legged Cowboys with some of the management that owned it prior to Elliott.

The closing of 3 Legged Cowboy comes as a new bar debuts. Cockpit opened a 1,900-square-foot space this month, joining just a handful of LGBT bars south of Interstate 20.

What’s your favorite memory of 3 Legged Cowboy, or its predecessor Hoedown’s? Post it in the comments below.