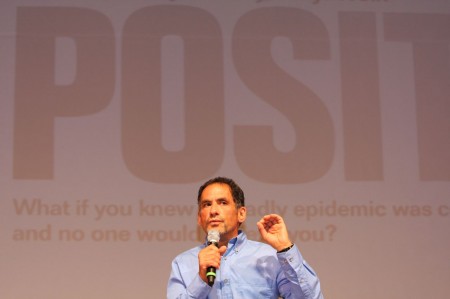 Nearly 300 people filled a screening of the documentary “Sex Positive” on Saturday, an evening that raised funds for three non-profit HIV organizations.

The film chronicles the work of Richard Berkowitz (top photo), a hustler and writer in the early days of the HIV epidemic in New York City who worked with musician Michael Callen to write and distribute the first safe sex manual for gay men. The effort earned them scorn in the early 1980s for its call for condom use and an end to the promiscuity that fed the newly-emerging disease.

The evening, which also included a panel discussion and a reception in a penthouse of the W Atlanta-Downtown, raised funds for Positive Impact, Action Cycling Atlanta and the Hope Clinic of the Emory Vaccine Center, which develops vaccines for HIV and other infectious diseases.