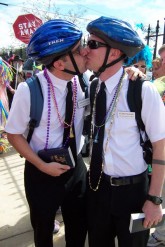 The Atlanta Film Festival opens Thursday with a number of films with gay and lesbian themes included in this year’s week-long lineup, headed by “8: The Mormon Proposition,” wrapping with an LGBT afterparty and lots of good viewing in between.

Reed Cowan and Steven Greenstreet’s documentary debuted at this year’s Sundance Film Festival to considerable buzz and leads the “Pink Peach” pack of entries in this year’s festival. “8: The Mormon Proposition” (top photo) details how the Mormon Church was instrumental in passing last year’s anti-gay marriage Proposition 8 ban on same-sex marriage in California.

The film also looks at the Mormon stance on gay rights. What comes across most vividly here is how dead-set many of the Mormons depicted in the film are against gay men and lesbians – and the power they have wielded both in their home state of Utah and California, as well as the rest of the country.

Among those interviewed are gay couple Tyler Barrick and Spencer Jones, who got married in California before Prop 8. Barrick himself is a direct descendant of one of the Mormon founders.

One of the chief villains of the documentary becomes Mormon Bishop and Senator D. Chris Buttars, who says “gays represent the greatest threat to America going down today” in an interview with Cowan. This is stark material. Forget the new “Nightmare on Elm Street” – this is the scariest thing you’ll see this spring. “8: The Mormon Proposition” screens April 16 and April 21.

Making its world premiere at the festival is Kaitlin Meelia’s “Play in the Gray.” It’s about the Boston drag-based theater group All the Kings Men (second photo). Meelia, who will be present at the April 17 screening along with four members of All the Kings Men, began the film three years ago.

In making her first film, the lesbian filmmaker admits she was taken with the troupe and their “gender bending performances on stage.”

“I was really surprised,” she says. “They have a lot of fun, but they are very serious about what they do. The group rehearses all the time and a few actually do this as their full-time job.”

The most star studded of this year’s “Pink Peach” films is “Handsome Harry,” with Jamey Sheridan as a middle aged Vietnam vet urged on by a dying friend to seek atonement for something they and some colleagues did to a friend while in service.

Other films with gay and lesbian appeal include “Mother Earth (Tierra Madre),” based on a true story of a mother raising her children with her female partner on the Mexican border.The film screens April 17 and April 20.

Also on April 17 and April 20, Wendy Jo Cohen’s “The Battle of Pussy Willow Creek,” a tongue in cheek mockumentary about the Civil War, comes complete with some gay characters. “Who Saw Him (Chi L’ha Visto’),” finds a hunky, often bare-chested, young gay man off to Italy to try and find his real father on April 18 and April 20.

Also in the mix are a group of gay short films on April 17 and April 21. The set includes James Franco’s “The Feast of Stephen.”

To wrap the big gay offerings up in one neat package, the annual “Pink Peach” Atlanta Film Festival Afterparty takes place April 21 at Burkharts after the “Mormon Proposition” screening. The party is hosted by Out On Film, Atlanta’s LGBT film festival, set this year for October.