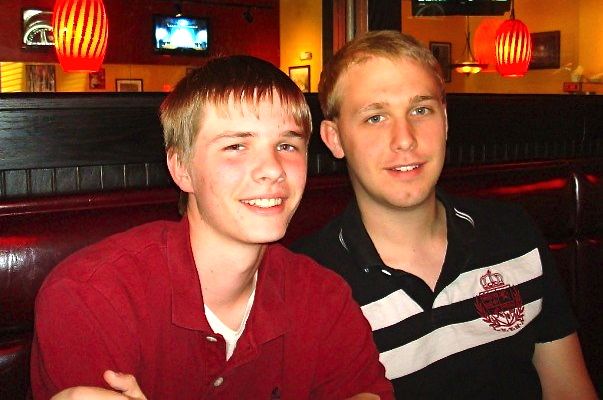 Two gay bloggers and political geeks from north Georgia are bathing in a sea of blue politics this week known as the Democratic National Convention a few hours up I-85, a trek made possible by donations from LGBT supporters. Dustin Baker and boyfriend Brett Johns are among a handful of LGBT delegates in Georgia’s delegation at the convention taking place in Charlotte, part of a larger contingent of nearly 500 gay delegates from every state in the U.S. The group is providing an ironic spin on Charlotte’s Queen City moniker. We talked with Baker and Johns in July, the duo behind Georgia Progress, as they launched an online fundraising campaign to help offset estimated $4,000 cost for the pair to attend the convention. They asked supporters to chip in $1,000. With the convention now underway, we checked in with Baker on how it’s going for the pair. The takeaway? They are fueled more by political adrenaline than sleep and hope to convince you political couch potatoes to take action at the ballot box in November. Your online campaign raised $1,160. Were you surprised that supporters helped you surpass your goal? How did that help your trip to the DNC? Did it mean a room upgrade for you and Brett? Brett and I were excited to see us pass our goal. The trip is costing a bit more than the money we raised, so we are still pinching our pennies. By the time taxes and all came due, our hotel totaled $1,500 by itself. We passed on the room upgrades. Luckily, there has been a ton of free food at the different events, so we haven't resorted to our PB&J strategy yet. We sincerely thank everyone who donated. So much of our money came from the LGBT community, and we are trying to attend every LGBT caucus, discussion, panel, and event we can possibly attend. On the first night, we attended a welcome celebration for LGBT delegates called UNITY at the North Carolina Dance Theater. On Monday, we attended the LGBT Reception at the EpiCenter put on by the Victory Fund. [On Tuesday], we attended the LGBT Caucus meeting, the HRC welcome party (where we met Brett's hero Barney Frank), and the Stonewall Democrats event. We did all this in addition to the other events because we feel we need to represent our community. You are there now. Set the scene for us. What's it like being on the floor? What are you two looking forward to most? This scene is just astounding. You turn on the convention on television and see the speeches, but you really do not get the experience without being here. Outside the Convention Center and Time Warner Arena, there are events sponsored by other organizations. Brett and I have really liked the Huffington Post OASIS. But once you get inside the convention center, it’s like entering political mecca for me. To see everyone so united for one goal and with one purpose. The platform vote was historic. It was the first time Democrats have included full marriage equality in the platform. It was great. There are always a few jokers that vote nay on everything. There were a few that voted nay on adjournment. However, when they asked for nays for the platform vote, it was dead silence. No one in that hall wanted to be seen as being anti-LGBT. What do you want to see out of Obama's acceptance speech on Thursday? President Obama has a lot to say on Thursday night. I want to hear him acknowledge the LGBT families, but most importantly, I want to hear him speak out against bullying. I have been reflecting on the priorities of our community. I do not want to understate how important DADT and Marriage Equality have been for us; however, we have children across our nation committing suicide due to bullying. Marriage is so very important, but no one is killing themselves over not getting married. I want to see him speak out on bullying. CNN reported Tuesday that the presidential race is tied 48-48. What do you to say to LGBT folks at home in Georgia that aren't interested in the race or are sitting on the fence about who to support? I have one thing to say to the people back home thinking about sitting out: If you are not at the table, then you are on the menu. Georgia is turning blue. We have always been saying that, but we are almost at a tipping point. The increase in Black and Latino populations, along with historic turnout by Democratic groups, has made Georgia a competitive state. A recent poll showed President Obama only three points behind. The LGBT community is a huge part of turning our state back blue. I have heard many say that President Obama endorsed marriage equality for political reasons, but I want to let you know I don't believe that. He signed the Matthew Shepard Act and ended DADT. He has done so many smaller, but no less important, things for our community. He knew we would be on his side come 2012 because he had been there for us. He did not need to come out in support of marriage equality to win us over, he did it because he believed it. Mitt Romney's team is already attacking him over it. What will it mean to see the first president to support marriage equality defeated in November? If we do not support him and he loses, how much longer will we have to wait to see another president fight for our community? We must get out to the polls. We must register new voters. We cannot sit around while Mitt Romney reinstates DADT and turns back the clock on our community.