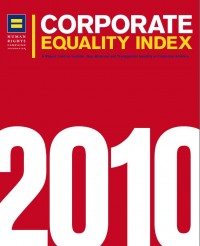 Six Atlanta-based Fortune 500 companies were among 11 in the region that scored a perfect 100 on a ranking of how companies and law firms address LGBT workplace policies and benefits.

Five other companies headquartered in Georgia–Alston & Bird, Cox Enterprises, ING North America Insurance, Sutherland Asbll & Brennan and Troutman Sanders–also notched a perfect score in the rankings, among a total of 21 companies in the state included in the report.

“At ING, we are committed to equality in the workplace for all employees,” Thomas J. McInerney, ING Americas chair and chief executive officer, says in a prepared statement. “We will continue to enhance our lesbian, gay, bisexual and transgender (LGBT) workplace-inclusion policies and practices because our stakeholders – employees, customers, community and suppliers – expect no less and these policies and practices are drivers of our success and competitive advantage in the marketplace.”

“The Corporate Equality Index 2010 shows that, even in the most challenging economy, leading employers are forging ahead of federal and state law to recruit and retain a diverse workforce — regardless of employees’ sexual orientation and gender identity or expression,” Solmonese says in a prepared statement.

The latest edition of the Corporate Equality Index rates 590 businesses on a scale of 0 to 100. Some 305 enterprises achieved top ratings, compared to 260 last year, and employ more than 9 million full-time employees.

Of the 21 companies in Georgia included in the report, 11 scored a perfect 100. Mirant Corp. scored the lowest among companies in the state with a 45, mirroring its score from a year ago.

Three firms — Chamberlin Edmonds & Associates and Calhoun-based Mohawk Industries — scored among the lowest in the state and dropped from their scores compared to last year. Chamberlin scored a 53, compared to 68 last year, while Mohawk scored a 50, compared to 65 in 2008. McKenna, Long & Aldridge, which scored 90 last year, saw its scored drop to 80 this year.

In 2008, 11 companies in the state also scored a perfect 100. The newest addition to that list–Delta–scored an 85 last year. Sutherland Asbil also increased its score, moving from a 95 last year to 100. ChoicePoint, which scored a 100 last year when it was headquartered in Atlanta, is now part of Ohio-based LexisNexis Group. That company scored a 100 in the current report.

Georgia companies included in the report and their rankings:

The Atlanta Gay & Lesbian Chamber of Commerce will honor the Atlanta-based companies that scored a 100 during an event Nov. 11. View the full event listing from the Project Q Atlanta community calendar.