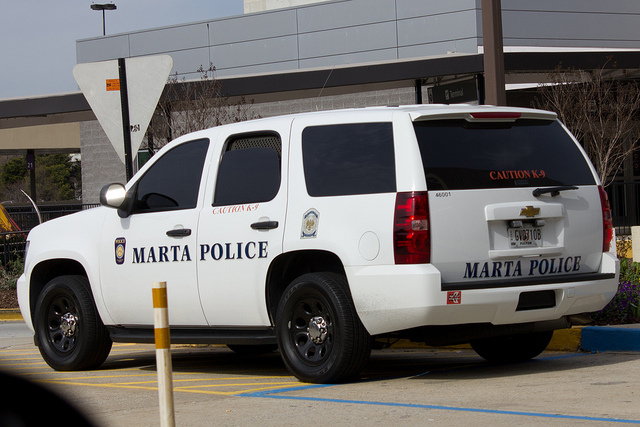 A flash of a badge helped an off-duty MARTA cop convince an on-duty DeKalb one that yes, officer, I'm just giving this transgender prostitute that I do not know a ride home. At 3:30 in the morning.

But that's the story Lt. Todd Hill offered to DeKalb Officer D.E. Meeks on Aug. 2 when he was stopped after Meeks watched him chat up transgender sex worker Yohanes Yohanes, who then hopped into Hill's Chevy Equinox. This stellar example of MARTA customer service took place near an area of Memorial Drive in Stone Mountain known for sex workers looking for, ahem, rides.

The incident was first reported Wednesday by WSB, which was chronicling the legal troubles of a handful of MARTA cops. Hill was the only one of the bunch that didn't face charges after his brush with the law. A review of the police report obtained by Project Q Atlanta offered additional details about how the incident unfolded.

So far, so good for that, ahem, ride home. But wait. The police! The on-duty kind.

“I then observed the vehicle travel northbound about 10 feet at which time I initiated a stop to investigate. The vehicle stopped while still in the roadway at which time I approached the passenger side and asked why they were stopped in the roadway and the driver stated that he was giving the subject a ride. I asked the passenger to step out and then asked the subject if he knew the driver and he stated “no.”

And before the DeKalb officer got the wrong idea, the driver made it clear he was a brother in blue just out to help a sex worker he didn't know.

“The driver now known as Todd D. Hill advised me that he was an officer and showed me his badge and identification.”

At this point, you would be arrested. But for this guy, some professional courtesy. And a call to his supervisor to confirm his employment. Just imagine how that conversation went.

But hey, even Yohanes backed up his off-duty suitor probably hoping to avoid another arrest, of which she has several.

“Yohanes stated that Mr. Hill only asked if he needed a ride and did not mention anything sexual or offer money.”

Yohanes went to jail on an outstanding warrant. Hill got a pass. And MARTA gets a gold star for the extra mile its employees will go to offer free, ahem, rides.

But wait, trolling for transgender sex on Memorial? Oh, right. It's far away from Peggy Denby, Steve Gower and those “thugs in drag.”